11th January 1993: the decree authorizing the creation of the School was signed. Placed under the supervision of the ministry for industry, IMT Mines Albi is a public administration institution.

The status of IMT Mines Albi

A major player at the crossroads between digital and engineering sciences and technologies, the school applies its skills in the context of the major fields of digital, industrial, energy and ecological transformations and their impact on the industry of the future, urban life, health and personal self-reliance.

The school is led by a director, appointed by decree. He is assisted by :

Audrey LORIDAN-BAUDRIER is Acting Director of the school since June of 2021.

A number of instances watch over the proper functioning of the school and the development of strategic axes in line with its attributed missions.

Its director, appointed by decree is assisted in his task by two deputy directors, the director of studies and the director of research, innovation and economic relations, a Secretary-General and the governing board.

The institution is administered by a decision-making body, the School Board, composed of 24 members :

The school has a number of advisory bodies with distinct missions :

Consulted by the Director, the advisory committee for education is working towards the development of ever-greater quality in the teaching of engineering studies at the school. It intervenes upstream of any modifications to the curriculum of the school, before the changes are passed on to and validated by the school board.

The Health, Safety and Working conditions committee, as its name indicates, concerns itself with issues related to hygiene, work safety and preventative medicine in the school. It assists the technical committee.

The technical committee decides on issues relating to :

It meets at least twice a year.

Members: The Director (chair), the Secretary-General, the staff representatives.

Placed under the direct authority of the Director, the disciplinary board must be consulted before the any sanction above the level of a warning comes into effect, after appearance before it of the student in question. These sanctions - warnings, reprimand, temporary or permanent exclusion - are requested by the Director in case of a breach of internal or academic rules.

IMT Mines Albi, a school connecting humanity and science for a sustainable and agile society 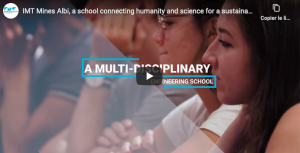